Most drivers will agree that sharing the roadways with large trucks can be nerve-wracking. We all know the feeling: you are on the entrance ramp to a highway trying to merge safely with the traffic. As you look in your rearview mirror, you notice a large truck barreling down the road at a high rate of speed in the right lane. You turn on your left signal and cautiously drive onto the roadway after the truck has passed, but before another vehicle takes up the space you want to merge onto. Hopefully, you do this successfully and you sigh in relief — until the next time.

Our fears about driving safely alongside massive trucks are not surprising. An 18-wheeler can weigh as much as 40 tons when carrying a full load of freight, as opposed to the average sedan, which weighs less than four thousand pounds. Comparing our relatively lightweight rides with any large truck brings to mind a David and Goliath scenario. This is not overstated since the number of crashes with vehicles that dwarf our compact cars, sedans, and SUVs has risen dramatically. 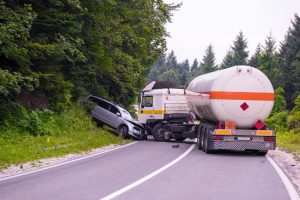 The National Safety Council reports that from 2010 to 2019, there was a 36 percent increase in deaths as a result of crashes involving large trucks. More than 70 percent of those fatalities were people who were passengers in other types of vehicles. The number of non-fatal injuries resulting in accidents with large trucks increased by seven percent during the same period. Statistically, this is not a pretty picture. And it begs the question: Why are there so many traffic accidents involving large trucks?

Some of the causes for the frequency of truck-car collisions relate to issues that arise because of the size and weight of trucks. It takes more time to stop, increase speed, and maneuver a large truck than it does a smaller vehicle. And while it takes a truck longer than a car to drive up a hill because of its weight, it goes much faster more quickly when descending a hill. Also, trucks have a higher center of gravity, which has an effect on the truck’s rollover tendency, especially when it is rounding a curve. Additionally,  on a windy day, a truck can sway into the path of another vehicle or even overturn due to its large surface area.

How To Prevent Getting Into an Accident with a Truck 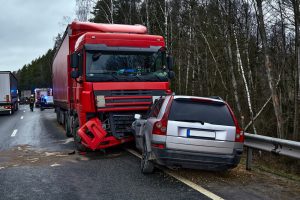 Although traffic accidents involving trucks caused nearly 5,000 fatalities in 2020, there are ways to prevent or at least diminish the effects of these collisions.

Despite taking all of the precautions necessary when you are on the road, you may still end up being seriously injured in an accident involving a truck. Someone close to you may even have passed away due to the accident. If you believe that a trucker caused your accident, rest assured that you can call (301) 220-0050, chat online, or email any of our Virginia truck accident lawyers at CHASENBOSCOLO. You will get a free consultation about your case as well as representation throughout the legal process with no up-front cost.

Our legal team is not afraid to stand up to the big insurance companies, and our more than $700,000,000 in settlements and verdicts are proof of that. You have so much on your mind right now, what with health and money concerns. When you contact our team, your concerns become our priority.