Aearo Technologies, Inc. sold its Dual-Ended Combat Arms Earplugs to the Defense Logistics Agency without disclosing defects that decreased the intended hearing protection. 3M purchased Aearo in 2008 and continued manufacturing and selling the earplugs. In 2016, the US Dept. of Justice filed a False Claims Act case against 3M alleging that 3M was aware that the 3M earplugs were too short to be fully inserted into the ear, failed to provide adequate noise protection, that 3M was aware the earplugs were defective and that the test results were manipulated to make it appear that the earplugs complied with regulations. As a result, in July 2018 3M agreed to pay to the US government $9.1 million to resolve the allegations. However, 3M has not admitted fault nor liability. 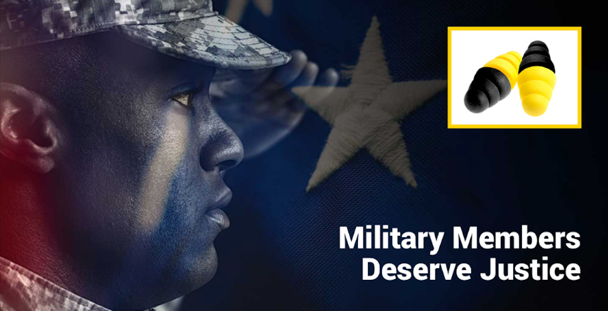 3M supplied more than 750,000 pairs of ear plugs per year and they were sold by 3M to the military until 2015 when 3M discontinued the earplugs. The multi-colored ear plugs could be worn in two positions. In one position, the earplugs were supposed to minimize all loud noises. Turned the other way, the earplugs minimized the loud noises while permitting conversations. The earplugs failed to maintain a tight seal and allowed dangerously loud sounds to penetrate causing hearing loss and tinnitus to military members between 2003 – 2015. According to some studies, as many as 1,500,000 military personnel are affected.

This claim is not against the US government nor the armed services and does not affect disability benefits. The claim is against 3M. If you or a family member were active duty between 2003 and 2015 and suffered hearing loss or tinnitus, you may be eligible for compensation. Contact CHASENBOSCOLO by calling (301) 220-0050 to go over your case with a knowledgeable injury attorney.

Ben took my case when I was desperate and lost. He worked tirelessly to get me worker's comp in DC for a chemical long term injury I suffered at work....

Experienced, professional, and personable attorneys who genuinely care about each client

I was treated like I was the only customer they head

Mr. Teodori - I'm so thankful you took the time to review my case and give me sound advise. This extension of kindness and thoughtfulness is what separates good legal...

They were friendly and went the extra mile for my case.My attorney Dave is the best!

My experience with ChasenBoscolo has been excellent. They call me to see how it am doing and to give me an update on my case.

Service I have received thus far has been impeccable. Both the legal assistant and my attorney have kept me in the loop every step of the way.

Exceptional,Tremendous, Remarkable...I could not ask for a better attorney and case manager, when I have questions or concerns my attorney David and my case manager Xenia is always available either...

I was there to pick up some exhibits from an attorney.

The best app ever!!

I will never forget how ChasenBoscolo took care of my mom, my sister’s estate and me from beginning to end. From what I recollect, you guys were like extended family—always...

Over the past 20 years I have relied on chasen and boscolo to handle situations that have been taking care of with the utmost of care patients and customer service...

Brittany Perry and Emmily Fitzgerald are the dream team. These two were always helpful and patient with explaining the process of my case. I was never surprised with anything that...

Everyone was great and very professional. Patrick Stewart was #1,he always informed me of dates,changes and was very knowledgeable of my case. Thank u ChasenBoscolo

Chasenboscolo is amazing company they help me from day one &was with me each step of the way till it was over.They always let me know everything up front before...

David Snyder and Julio Rodriguez are taking good care of me. They are much more than lawyers they are my friends. Thank you so much for being there for me...

Absolutely great experience, Mr Boscolo (Ben) is a fantastic lawyer and even better friend. Five big stars for all your effort my brother. Excellent law firm and great people who...

I would definitely recommend Chasen and Boscolo. They look out for your well being. The team that I had cared about me and what I was going through. The walled...

Everything was excellent. The thing I liked most that I was well educated on any issue I did not understand. Every time I called, my call was either answered right...

Awesome experience!!! The people explain to you step by step everything that could and would happen, return calls promptly, and made everything easy for me. I highly recommend ChasenBoscolo.

Everyone at ChasenBoscolo is very kind and personable. They are one of a kind and put your interests first. I would recommend them to anyone seeking professionalism and a great...

Chasen Boscolo is by far the best company I have ever been associated with. I was referred by my boss after my accident. I felt welcome and loved throughout the...

They have wonderful staff that make you feel at home. My case manager Mabel is awesome!!! She always returns my calls promptly and let's me know what is going on...

Today is the 24th "anniversary" of a bad Helicopter crash 05-31-94 whilst I was spraying forestry. Barry Chasen personally took a lot of interest in my case and his whole...

I have been working with Dave Snyder and Chasen-Bolscolo on my DBA disability claim for the last four (4) years and I cannot say enough good things about the representation...

My experience with this company started out well, then felt a little discombobulated, finally I received a stable, reliable, honest, tough lawyer named Shaketta Denson. She took care of my...

I've had the esteem pleasure of having attorney Matt Peffer as my lawyer, and Nikki Kelly as my case manager. I haven't really needed to talk to Matt that often....

I have the pleasure to work with attorney Joseph Yahr, and I am very happy to have he as my attorney. Joe is every patient and calm man, I my...

I had the pleasure of working with David Snyder and Julio Rodriguez and they were by far remarkable!!! Dave went above and beyond what I expected, he really fought for...

Excellent attorneys and client services. Confident, considerate, thorough, competent, and supportive. We worked with Ben Boscolo and Shaketta Danson and both excelled in performance, communication, and competence. They told us...

I had a case pending from Oct 2015 that was just closed, I can truly say Michael Reiter and his team did an excellent job of representing me, I won...

This is a team of truly professional and caring people. Benjamin "Big Ben" Boscolo was thorough, insightful, and a winner. I would recommend these guys to anyone. Their entire staff...

Truly, personable and caring about their clientele. We have always been able to depend upon C/B for an amiable outcome, in best interests. We have been with them since 2013...

Chasen and Boscolo are the best in the business!!! They have the most professional staff available for any legal need you may have. I would recommend them to anyone in...

Best damn lawyer I've ever dealt with. I've personally known Mr Boscolo for over 20 years. He is not only a GREAT LAWYER, But he is a great guy. I...

I'm David Casey lawyer Matthew J Peffer ESQ was excellent in my case he treated me family. His P L Heather was also wonderful. If you have a case these...

I think ChasenBoscolo are honest and fight a great fight for their clients all of the time.

They are the best Lawyers with a outstanding performance.

I am soo fat happy about going to the team members, Chasen Boscolo.

I've been using this law firm since maybe 2002! Customer Relations is @Xfinity#

Joseph Yahr what a great attorney

The best of best